The payback period is the time it takes for a project to recover the investment cost. For example, if you invest $100 and the returns are $50 per year, you will recover your initial investment in two years.

The time value of money is an economic concept that refers to the fact that money available in a near future is worth more than the identical sum in the far future.

Alternatives to the Payback Period

Because of the issues with the payback period, the Internal Return Rate (IRR) and the Net Present Value (NPV) are better alternatives to the PP. These measurements do take the time value of money and all the cash flows into account.

Examples of the Payback Period

When the cash flow remains constant every year after the initial investment, the payback period can be calculated using the following formula:

In this case, what period do we take into account? The first one or the second one?

When there is no period of zero accumulated cash flow, the payback period will be a positive rational number, not an integer. To calculate the payback, you must estimate the fraction of the year that passed since the cash flow was negative for the last time until it reached the zero value. For this estimation, we assume a linear behavior of the evolution of the cash flow.

If the absolute value of the last negative accumulated cash flow is the same as the first accumulated positive one, the fraction is 0.5, like in the following example:

In the following plot, we can see the evolution of the accumulated cash flow: 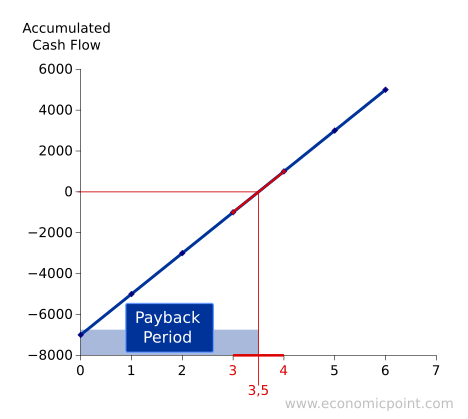 When the absolute value of the last accumulated cash flow is not the same as the first positive cash flow, the fraction will not be 0.5: 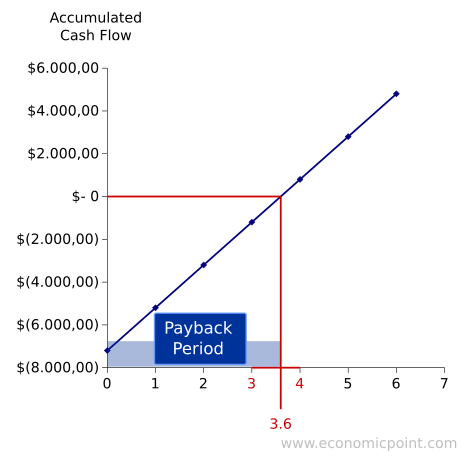 How to Calculate the Payback Period in Excel

While is it possible to have a single formula to calculate the payback, it is better to split the formula into several partial formulas. This way, it is easier to audit the spreadsheet and fix issues.

Follow these steps to calculate the payback in Excel:

Shameless plug: We created an Excel file to calculate the payback. It updates automatically and allows to enter multiple investments, not only an initial investment. It displays the payback using fraction years and also years months and days. Actually, we used this file to create our examples, you can get it for only $5 using the following link: