The Great Depression was the biggest economic crisis in history. It quickly spread worldwide and lasted several years.

The Great Depression began with the Wall Street crash of Thursday 24, 1929 and ended in 1942, when unemployment level recovered.

Initially, the crisis had a fast and strong impact in the U.S. banking sector. Afterwards, it extended to the real economy and to other countries.

The Great Depression has many causes. The international economy was very fragile. On the other hand, the US economy had internal issues.

Economists have learned a lot from the Great Depression. For example, that capital markets need adequate regulation. Protectionism can do more harm than good. When unemployment is high and inflation low, monetary easing can be good.

¿What caused the Great Depression?

The Great Depression has international causes as well as US local causes.

In the international economy, the most important factors were:
- The harsh conditions imposed to the countries defeated in the First World War.
- International patterns in trade, investment and people flows
- International financial system and the behavior of central banks. The Gold Standard was still in effect

All this factors causes created favorable conditions for the outbreak and rapid spread of the crisis.

Did Keynes predict the Great Depression?

Keynesian Economics had a strong impulse after the Great Depression. One of the causes of the Great Depression were the conditions imposed on the countries defeated in the First World War. In 1919, at the Palace of Versailles, John Maynard Keynes, left the peace conference in protest of the peace treaty.

Keynes did not agree with the imposed terms. He predicted that the harsh conditions would have nefarious consequences on the world economy. 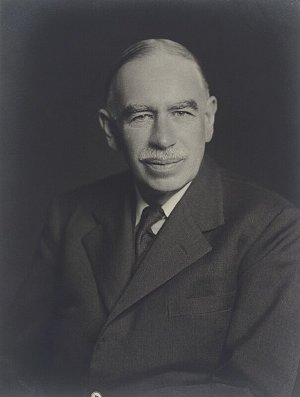 The Treaty of Versailles was signed on June 1919. In December of the same year, Keynes published the book The Economic Consequences of the Peace.

The book was a best seller. He criticize the treaty and argues for a more generous peace, for the sake of the economic well-being of Europe.

After the First World War, the international economic system was characterized by a reduced international flow of goods, capital and people.

Before the WWI war

- London was the leading international financial center.
- Many Europeans could migrated to the United States. The migration eased the European labor market and provided labor for US companies.

After the WWI war

- New York was the new financial center. New York banks financed foreign companies and banks.
- US and other American countries, like Canada and Argentina, limited the immigration of people from Europe. Unemployment was high in Europe.

International Financial System and the Behavior of Central Banks

Many countries had recently experienced periods of high inflation. After the outbreak of the Great Depression, economic mainstream was still reluctant to increase the money supply to ease unemployment.

US Policies and the Great Depression

After 1921, United States entered a period of economic prosperity that lead to high growth rates for several years. This, together with the loose regulation of financial markets, led to many families to finance the purchase of durable goods with debt.

In face of the increased demand, the US durable goods industry flourished. For instance, the automotive industry saw explosive growth rates before the Great Depression.

Prosperity lead to many people investing in stocks. Loose regulation allowed banks and other financial agents to attract unwary investors. Market manipulation was not prohibited like it is now.

A common practice was the so called “pump and dump” scheme: several people joined together to “inflate” a stock price and attract inexperienced investors into buying that stock. Afterwards, they sold it at a higher price.

Many people even took loans to invest in the stock market. 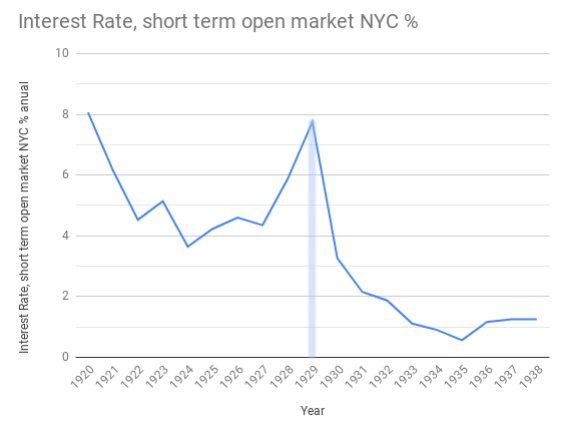 In face of the new tight monetary situation, foreign businesses and governments were having a hard time to refinance it’s debt.

Also, there was a contraction in the world monetary supply.

When the Great Depression broke out, the Federal Reserve inadequate behavior (or the lack of action) played a fundamental role.

The Federal Reserve was tied by its internal regulations inherited from the Gold Standard, which prevented it from carrying out an expansive monetary policy. But also the consensus among most economists was that there was no need for an expansionary monetary policy.

An expansive monetary policy would have eased US banks and the international financial system.

The Onset of the Depression

By mid-1929, the atmosphere on Wall Street was unusual. While the majority of people didn’t have stock investments, many were following the price movements with curiosity, as if it were a show.

Many thought that the market was overpriced, while others had the opinion that the prices were going to keep going up.

On October 23 1929, the New York Stock Exchange Index fell 4.6%. The next day, October 24, a crowd was on the Stock Exchange to follow the prices at the opening. That was black Thursday. The stock price index lost 11% on very heavy trading. Due to the huge volume, there was a delay of hours in the prices on the ticker tape. Investors could not know at what price the stocks were trading.

To avoid a bigger crash, some bankers placed large buy orders on blue chips stocks. The DJI index recovered, closing only 6.38% on Thursday.

The rally continued on Friday, October 25. But on Monday, October 28 there was again a panic sell off. That was the “Black Monday”: the DJI fell 13%.

The next day, “Black Tuesday”, October 29, the panic selling reached it’s peak and the DJI lost additional 12% with a record volume traded.

Herbert Hoover and the Real Economy

In face of the crisis, President Herbert Hoover response was weak. He called industrials and asked them to not cut wages. He asked local politicians to increase spending. But there was no direct action. The government trusted on the ability of the free-market capitalist system to self-correct its errors.

They also didn’t forecast the impact of the Great Depression. The day after Black Thursday, Hoover said: “The fundamental business of the country, that is the production and distribution of commodities, is on a sound and prosperous basis.”

In 1931, Senator Robert Wagner said that President Herbert Hoover had “clung to the time-worn Republican policy: to do nothing and when the pressure becomes irresistible to do as little as possible.”

As the Great Depression deepened and Hoover insisted with inaction, people started to loose faith in its capacity as a crisis manager.

When the Great Depression was already well under way, and maybe too late, Hoover took some measures to avoid further damage. In 1931 he created a Federal Employment Stabilization Board and declared a one-year moratorium on intergovernmental debts. In 1932 he took several measures to ease the pressure on the financial system. But he never took measures that directly helped the poor and the unemployed.

In 1932, Roosevelt said: “The present administration … has either forgotten or it does not want to remember the infantry of our economic army. These unhappy times call for … plans … that build from the bottom up and not from the top down, that put their faith once more in the forgotten man at the bottom of the pyramid.”

The FED and the Banks during the Great Depression

The majority of officers in the Federal Reserve held an opinion of anti-interventionism. At first, they believed that the crisis would make only the weaker banks fail. This would make the system stronger.

But a lot of banks that looked solid before the Great Depression had big difficulties in collecting its loans and failed. Once a bank failed, many other banks were also affected.

The FED let the banks fail. People started to fear and started to get their money out of the banks. The whole banking system was in a delicate situation.

To protect American jobs and farmers from foreign competition, on June 1930, Hoover signed the Smoot-Hawley Tariff into law. The Smoot-Hawley tariff raised taxes on imports to the United States.

The consensus among economic historians is that the Smoot-Hawley Tariff exacerbated the Great Depression. Other countries took retaliation measures: foreign governments increased rates against American products and a wave of protectionism spread around the world.

The global increase in trade tariff caused a decrease in global trade. It took decades to unravel the trade barriers created because of the Smoot-Hawley Tariff.

World trade fell by one quarter of its volume. Overall resources allocation was less efficient and this additionally negatively affected economic growth.

Severity of the Great Depression

As the Great Depression developed, unemployment and poverty raised. Not only in the United States but also in the whole world.

In 1932 US unemployment level had risen to 23,60% and the GDP fell 13% in one year. A quarter of the population couldn’t buy adequate shelter or food.

Although unemployment level was near a quarter, many employed worked only part time with reduced salary, to avoid being laid off. Women increasingly sought work. Discontent was high.

Every sector of the economy was suffering: Banks, Factories and Farms.

Roosevelt and the Recovery

Franklin Roosevelt won the presidential election and took office on March 4, 1933. Roosevelt was a democrat that asked for more energetic and direct state intervention.

Roosevelt took immediate action to address the Great Depression. He quickly passed legislation to stabilize every sector of the economy: industrial, agricultural and financial. The series of programs, reforms and regulations is called the “New Deal”.

The programs focused on:

In the financial markets, Roosevelt stopped transactions in gold and rescued the banks. To avoid future similar situations, Roosevelt created the Federal Deposit Insurance Corporation (FDIC) and the Securities and Exchange Commission (SEC). The FDIC protected depositors accounts and the SEC regulated the stock market.

Recovery from the Great Depression

In 1933, the economy began to recover and a new period of growth began. Growth lasted several years. By 1937, almost all economic indicators were better than the indicators before the Great Depression.

From 1933 to 1940, except for the recession of 1937-38, the American economy grew at rates of 8 to 10 percent per year. But the unemployment rate remained near 15% during the decade. Although the GDP recovered fast, the labor force and the productivity also grew.

Instability in Europe also benefited the American Economy. When the political situation and possible war in Europe worried investors, they began to sell gold for US dollars. American banks could now offer credit at lower interest rates.

The World during the Great Depression

To avoid further pressure, some countries quickly left the Gold Standard. Great Britain left the gold standard in 1931 and also recovered fast from the Great Depression.

But the Great Depression continued in the rest of the world. Fascist and Communist organizations were gaining strength. In Germany, the Nazi Party was growing. On 30 January 1933, Hitler was appointed Chancellor of Germany and established a totalitarian regime. The Nazi propaganda blamed the Treaty of Versailles for the economic situation.

The collapse of Austria’s largest bank in 1931 led to a wave of bank failures across Europe. The German banking system was severely hit.

Trade protectionism continued. Germany, Italy and Japan didn’t have access to raw materials from colonies and its financial system was weak.

Japan invaded Manchuria in 1931, Italy invaded Ethiopia in 1935 and Germany occupied Czechoslovakia in 1938. These invasions are seen as a mean to access raw materials.

When the war broke out, USA supported Britain and France against Germany. The American manufacturing industry saw a sharp increase in its demand.

In 1941, Japan attacked Pearl Harbor and America entered the war. The second world war pushed demand to the limit of its capacity and unemployment level reduced to below its pre Great Depression level.