For example, if a worker can make 10 chairs per day, the production function will be:

In the linear example, we could keep adding workers to our chair factory and the production function wouldn’t change. If there are 50 workers, the production will be 500 chairs per day. Let’s now take into account the fact that we have fixed capital and diminishing returns.

Now, the relationship between output and workers can be seeing in the following chart:

Let’s now take into account the fact that there can be more than one input or factor. Let’s say we can have more workers (L) but we can also increase the number of saws (K).

Now, the relationship between output and workers can be seeing in the following plot: 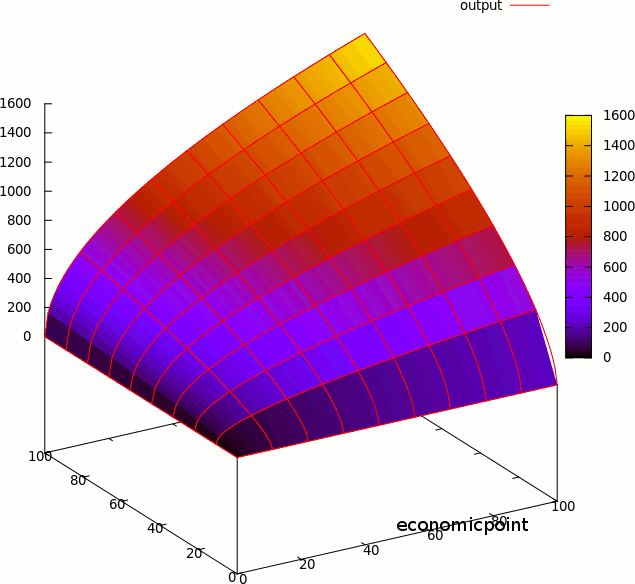 This kind of production function Q = a * Lb * Kc 0<b<1 0<c<1 is called Cobb-Douglas Production Function.

Let’s assume the only way to produce a chair may be to use one worker and one saw. An additional saw may be useless if we don’t have an additional worker.

This kind of production function is called Fixed Proportion Production Function, and it can be represented using the following formula:

If we need 2 workers per saw to produce one chair, the formula is:

The fixed proportions production function can be represented using the following plot:

In this example, one factor can be substituted for another and this substitution will have no effect on output.

Let’s say one carpenter can be substituted by one robot, and the output per day will be the same.

The formula for this example is:

If we go back to our linear production function example:

Where R stands for the number of robots.

This is a particular example of a multiple inputs (Example 3) production function with diminishing returns (Example 2).

Matehmatically, the Cobb Douglas Production Function can be represented as: 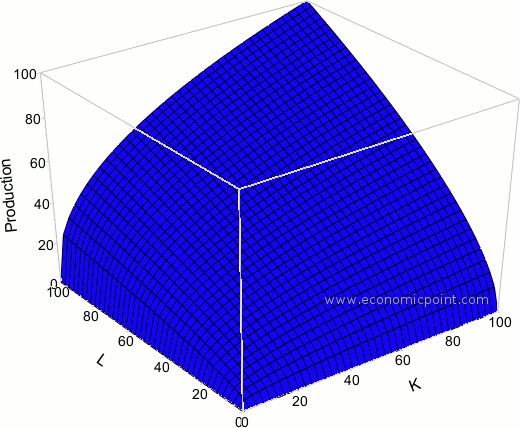 This production function has:
- Positive and decreasing marginal product
- Constant output elasticity
- Easy to measure returns to scale (they are obtained from β+α)
- Easy to go from the algebraic form to the linear form, and that makes this function usefull in econometrics models.

The CES Production function is very used in applied research. It shows a constant change in output, produced due to changes in inputs. Matehmatically, the CES function can be represented as follows: