Foreign Direct Investment is the investment of funds by people or companies of a country, in real assets of another country, with the purpose of obtaining profits in the future.

- Purchase of a company: when a company purchase another company located abroad, or a share of the latter.

- Mergers: when 2 companies, located in different countries, join and become one.

Foreign direct investment entails active management of foreign companies. It can also lead to technology and knowledge transfers, usually from the parent company to the subsidiary.

The influence in the management of the subsidiary can occur in the following ways:
- appointing managers
- establishing the subsidiary policies
- endorsing or not important decisions
- etc.

When the parent company engages in the same economic activities in the host country. For example, if a car manufacturer builds a car factory abroad.

Some motivations of horizontal foreign direct investment are:
- to take advantage of competitive advantages of different countries
- to serve differentiated products to different markets
- to avoid customs tariffs

When only a portion of the productive chain takes place abroad.

For example, if a car manufacturer builds gearboxes abroad; then imports and assemble them to the local made cars.

Using vertical FDI, companies can take profit of comparative advantages of different countries. In many cases, labor intensive activities are located where wages are lower. For example, some US manufacturing firms are producing parts in Mexico and then importing them to the US.

FDI can transfer technology and knowledge between countries.

On the host markets level, there is an increase and a diversification of local supply. This can be good for consumers, but local companies can lose market share and even go bankruptcy.

Many cases of corruption in host countries related with foreign direct investment have been observed. This is caused by bribes from parent companies to local government officials. (1)

If we compare outflows vs inflows, countries which made most FDI where:
- United States
- Japan
- Germany
- France
- Switzerland

Taking into account per capital flows, we can observe in the following map what countries generated more FDI (green: more FDI per capita). 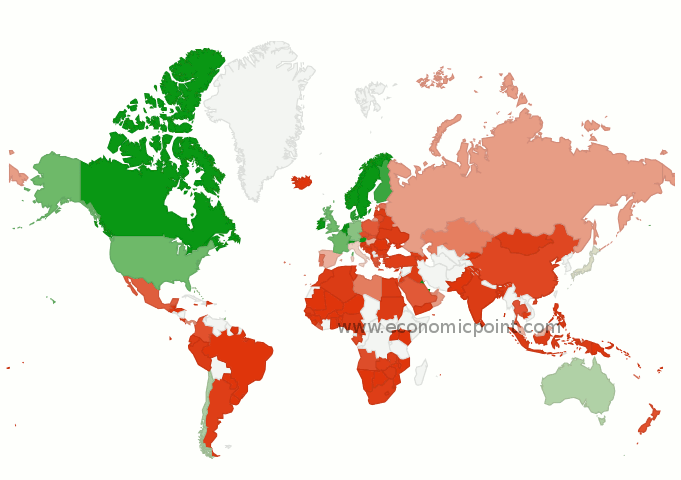 Financial foreign investment is the investment of funds by individuals, companies or government in financial assets (shares, bonds, etc.) of another country.

Financial foreign investment doesn’t entail active management of foreign companies. The shareholder of foreign financial assets is “passive”, in the sense that he just receive dividends, but doesn’t have any influence in managerial decisions.